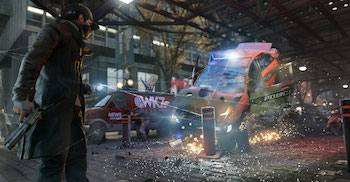 There's a reason why the driving in Watch Dogs looks so good.

As interesting as Watch Dogs looks, it's hard to ignore its resemblance to another Ubisoft franchise. Sure enough, Watch Dogs was, in fact, built using an engine originally created for a different game, but not the one you might expect. According to Ubisoft North America president Laurent Detoc, the foundation of the Ubisoft's next-gen herald was originally created for a new entry in the Driver franchise.

The situation is more nuanced than it might appear at first glance: According to Detoc, the transition wasn't as simple canceling Driver, then starting Watch Dogs. "It's not that Driver became Watch Dogs, so much as the driving game we made was a driving game," said Detoc. "The decision was made that there was another driving game being made and this one should be an open-world game where the guy comes out of the car and does other things. Then the team decides to reshuffle itself entirely. A few other people come in, a new creative director, and then they start a new game."

In another portion of the same interview released earlier this month, Detoc explained how Rainbow Six: Patriots is in the process of being rebuilt from scratch.