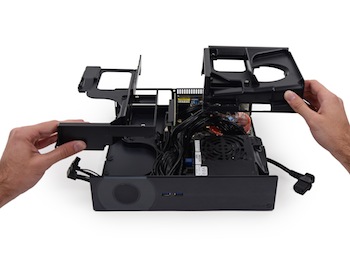 Wondering what the guts of Valve's prototype Steam Machine look like?

Valve's prototype Steam Machines are a pretty valuable commodity right now. Valve released 300 units into wild last week for beta-testing just last week. The hardware-buffs at iFixit somehow managed to get their hands on one and did their thing, taking the device apart, piece by piece. I guess there are only 299 now. (Not really. I'm sure they put it back together afterwards.)

What they found under the hood, unsurprisingly, was a pretty powerful PC. As you might expect, the parts are identical to the ones highlighted by Steam Machine beta tester Corey Nelson, who posted a teardown video of his hardware earlier this week: The Steam Machine beta unit sports a an Intel Core i5-4570 CPU, an NVIDIA GTX 780 with 3GB of on-board RAM, 16GB of DDR3 RAM, and a 1TB Seagate hybrid solid state hard drive. iFixit took a checked with their PC parts purveyor and found that building the machine from scratch would cost about $1,300.

iFixit also deconstructed the controller, which they seemed to like overall. Specifically, they think it's comfortable to hold and has "enough buttons," but found the lack of a battery kind of jarring. (The controller is wired with an extra-long USB cable.)

Since its part of a beta, the device described in this takedown may not be the definitive version of a Valve Steam Machine. In fact, the one(s) they end up selling may come with completely different parts.

If you want the full blow-by-blow Steam Machine takedown, complete with pictures, you should check out the full iFixit report.