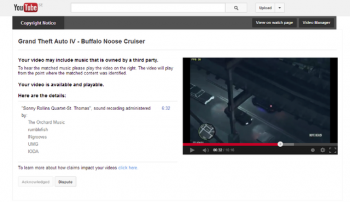 Ever listen to the song "St. Thomas" while cruising around Liberty City? Remember how it sounded exactly like being chased by a horde of police cars? No?

Well, here's a new one for the whole YouTube content ID debacle. According to the video hosting service, if you post a clip containing the police sirens from GTA IV, you're actually guilty of copyright infringement against the jazz group Sonny Rollins Quartet. YouTube user Taltigolt, in talking with Kotaku earlier this week, reported that a video he posted of him going on a police chase through Liberty City was flagged for containing the Sonny Rollins song "St. Thomas" at the 6:32 mark. Problem is, if you go to that part in the video, which can be seen here, all you hear is the wailing of police sirens. And no matter what your thoughts on jazz might be, that's definitely no Sonny Rollins song. Taltigolt provided a screencap to Kotaku of the content ID claim against him, which can be seen at right.

GTA IV fans might remember that "St. Thomas" is actually a song on the game's jazz station, but the fact remains it doesn't show up anywhere in Taltigolt's video. Taltigolt did admit to Kotaku that he acknowledged the copyright claim to YouTube without first checking his video to verify the allegation. It's been a rough week for YouTube users, as the company's recently revamped content policies have seen them cracking down on numerous videos. Some artists have even found themselves accused of stealing their own material. Earlier today, one game developer even founded the non-profit WhoLetsPlay to give content creators the knowledge to avoid and fight infringement claims.