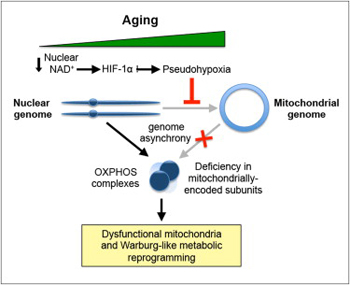 Scientists plan to test an anti-aging compound that could be used to treat cancer, dementia, and diabetes.

After successful trials on two-year-old mice to make them appear six months old, scientists from the US and Australia could begin testing an anti-aging compounds on humans next year. This won't be any fountain of youth, but the theory of age reversal could help treat diseases such as cancer, dementia, and diabetes.

The study, published in Cell yesterday, focused on mitochondria, cells that produce energy. Aging occurs because the cells' nuclei degrade. The body also loses a chemical called nicotinamide adenine dinucleotide, known as NAD, so researchers injected this chemical in the mice. The result was a reverse in aging. Scientists compare the two-year-old mice appearing six months old to what it would be like for a 60-year-old to feel 20 years old. The mice reversed in age in a week in a process that a researcher described as "amazingly rapid."

"The aging process we discovered is like a married couple," David Sinclair, a professor based at Harvard Medical School, said. "When they are young, they communicate well, but over time, living in close quarters for many years, communication breaks down. And just like a couple, restoring communication solved the problem."

Trials for humans may begin as early as next year, and the researchers say side effects to the compound are minimal because it is a chemical that naturally occurs in the body. However, the compound is no fountain of youth. A "magic pill" used to make people live drastically longer is several years away, and it's not the point of this study. Even if it were, the cost of the compound per day would be about $50,000, Nigel Turner, co-author of the study, estimated.

"People think anti-aging research is about us wanting to make people live until they are 200," Turner said, "but the goal is really to help people be healthy longer into old age."

Source: Cell via The Guardian