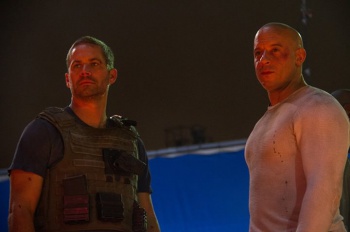 Vin Diesel has announced that the movie will still be completed despite co-star Paul Walker's untimely death.

The Fast And The Furious fans were deeply saddened by news of actor Paul Walker's passing earlier in the month. Walker was working on the franchises' latest film: Fast And Furious 7 at the time, and it was put on indefinite hold after his death. Now, Vin Diesel has announced over his Facebook page that despite Walker's death, the movie will still be finished, although it has been delayed from it's original release date of July 11, 2014 to April 10, 2015.

"The last scene we filmed together..." said Diesel, referencing the picture above. "There was a unique sense of completion, of pride we shared... in the film we were now completing... the magic captured... and, in just how far we've come..." He then revealed the movie's new release date, adding "P.s. He'd want you to know first..."

Furthermore, The Hollywood Reporter reports that executives are trying to find a way to salvage footage already shot for Fast And Furious 7 instead of starting fresh, and that they hope to be able to retire Walker's character from the series using scenes already shot. It's the magic of editing!

Walker played ex-cop Brian O'Conner in the car action franchise, and somewhat ironically died in a tragic car accident earlier in the year. He was 40 years old.