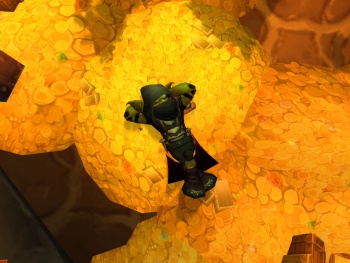 Ten men were sentenced to prison by a Chinese court for defrauding up to 11,500 World of Warcraft accounts.

Ten men in the Zhejiang province of China have been found guilty of defrauding up to 11,500 World of Warcraft accounts, and sentenced to prison terms of up to two years. The group's leader, a man called "Chen", reportedly organized a small workspace as his team's base of operations, and set to work "flipping" WoW accounts for an excess of $10,800 in profit.

Chen and his group worked their scam by purchasing stolen WoW accounts for $1 each. They would then "gut" them by selling all of the account's gold and gear for around $3 per account. This gave them ~$2 profit per account, and considering more than 11k accounts were pilfered, you can see how it adds up.

Chen took the hardest rap, being fined $8,000 and sentenced to two years in jail, while the rest of his team will serve smaller jail terms and a fine of around $1,000 each. All of the hardware used and funds gained in the operation has been seized by the police.

While it's certainly nice to see some justice doled out to these criminals, Chen's group were just the "middle men," and the shady individuals that they were purchasing these hacked accounts from in the first place are presumably still out there.

There's no word from Blizzard on how the trial and sentence would affect the players affected by Chen and his cohorts, although reportedly, all of his victims were also Chinese.