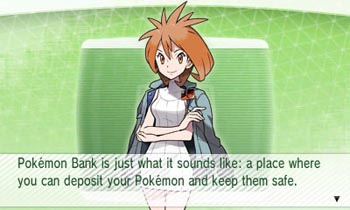 The western release of Pokemon Bank is unclear, and it is unknown when the app will return to Japan's Nintendo eShop.

Nintendo recently removed Pokemon Bank, an application that allows users to store their Pokemon in boxes online as a complement to Pokemon X and Y, from the Japan eShop. The downloadable application arrived in the Japanese eShop on Dec. 27, the original launch date, but due to its removal, the western launch of the app is now unclear.

The Nintendo Network status has experienced difficulties since yesterday and is still experiencing some technical difficulties with online services. With more Wii U and 3DS users connecting to the network on Christmas, along with the Japanese addition of Pokemon Bank, the network service was brought to a standstill. This prompted Nintendo to remove Pokemon Bank. The company has not stated neither when the application will return nor when it will launch for the west. If everything is fixed quickly, Pokemon Bank could launch on Dec. 27 in the west like planned. If not, there will likely be a short amount of time before anyone can deposit Pokemon online.

Nintendo has announced the 30-day trial for previously registered users will restart when the app returns. Currently anyone interested in trying out Pokemon Bank has until Jan. 31, 2014 to download the 30-day trial. Otherwise, the app costs $5 per year. Players who access the app before Sept. 30, 2014 can receive Celebi.

Users can deposit up to 3,000 Pokemon, and Pokemon can transfer from Pokemon Black and White and Black 2 and White 2 via a separately downloaded application called Poke Transporter. Bringing certain Pokemon from the Generation V games produces "some new events in the Kalos region," but this may mean people you talk to in-game may just gasp at rare Pokemon from the Unova region.