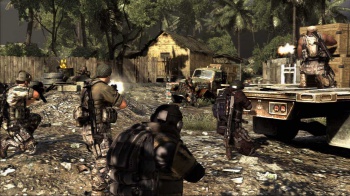 Sony has announced the list of games whose online multiplayer will be switched off in early 2014.

In a rather gloomy way to usher in 2014, Sony has announced that they're turning off the online functionality for a list of games in early 2014. Notable titles included in it are Gran Turismo 5, the entire Resistance series, and SOCOM 4, which was released just two years ago.

This means that online multiplayer, leaderboards and other features will not work starting on the specified date. You can, of course, play single player, but for games like SOCOM: Confrontation and MAG, they will be unplayable completely, as the games themselves don't have offline modes.

As of 20 May 2014 you will no longer able to use the online features of the following game:

As of 28 March 2014 you will no longer able to use the online features of the following games:

As of 28 January 2014 you will no longer be able to use the online features of the following games:

If you're one of the few people still playing online in one of the games mentioned above, go set up a clan match or something to give that game a last hurrah, alright? Or at the very least, go play 'em while you still can.