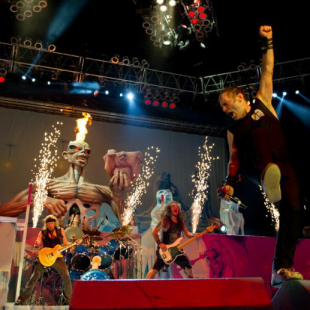 Metal legends Iron Maiden made more than $2.5 million from a single show in a country with a high piracy presence.

In case you haven't heard, the music industry has something of a long running beef with the internet. Granted, it's not without reason. Illegal file sharing is probably one of the industry's most persistent revenue drains. That being the case, many music companies have taken something of a scorched earth policy toward pirates, slapping individuals with lawsuits so devastatingly hefty that they probably won't even have money for food in the future, let alone music. Not every musical entity is opting to go that route, however. Notably, some bands, rather than trying to send file sharers running to the hills, are actively embracing the brave new world offered by the internet.

It's recently been revealed, for instance, that the classic metal outfit Iron Maiden utilized analytics from the U.K. company Musicmetric to strategically plan one of its recent tours. Figuring that things like heavy BitTorrent traffic might also mean a sizable collection of fans, the group scheduled concert dates targeting high traffic locations. These shows subsequently netted the band some significant oodles of money, with a concert in Sao Paulo raking in more than $2.5 million on its own. These concert dates had the added effect of boosting the band's popularity online in targeted regions which could lead to even more profits down the road. "If you engage with fans, there is a chance to turn a percentage into paying customers," commented Musicmetric CEO Gregory Mead.

We're not going to delve too deeply into the various shades of gray that arguably color the debate over file sharing and online piracy. That said, we'll still say that it's always nice to see a group -be it a company, band, or whatever- trying to work with emerging technological trends rather struggling against the tides of change.