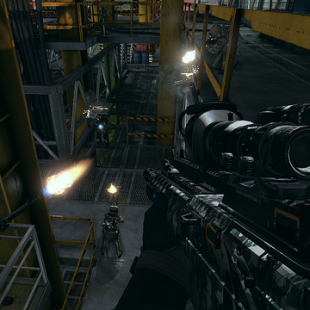 Zombie Studios has confirmed that players' in-game progress, currency and purchases in Blacklight Retribution will be saved when its beta ends.

One of the fun things about the new generation of consoles is how, to an extent, is the increasing prevalence of free-to-play titles. While the Xbox 360 and PS3 both boasted some nice free games, the Xbox One and PS4 both come with several quality titles players can spend their time on without spending any money in return. Shooter fans looking for something to do on the PS4, for instance, can partake in Zombie Studios Blacklight Retribution.

Originally released on PC, the PS4 port is a nice solid multiplayer shooter that you can spend money on or, if you'd rather, play completely for free with some restrictions. That being the case, it's also currently still in Beta, something that has left some of its new console players with some concerns. Namely, some have been worried that they might lose their progress as future updates and new versions became available.

Hoping to ease these fears Zombie has announced that players will, as hoped, be able to keep their in-game purchases, currency and character progress after the beta ends and the full game launches. In other words, if you were interested in Blacklight Retribution but were perhaps wary about jumping into it prior to full release, there's pretty much no reason to delay any further.