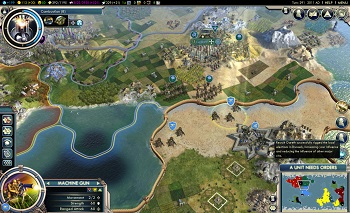 The famed designer doesn't want strategy games to go the way of the flight simulator.

My boyhood love of flight simulators hit its peak when I learned how to lob thermonuclear warheads in a ballistic arc over mountain ranges in F-22 Lighting 2. However, that flame was smothered in the hours I spent trying to work the true-to-life radar system in Falcon 3.0. It's a fantastic sim, but perhaps just a bit too detailed for my taste. Apparently I wasn't alone, as the genre is a refuge for the hardcore-only these days. In an interview with PC Gamer Sid Meier notes that trend towards complexity, and how he doesn't want it to kill off strategy games, like it did flight sims.

"Back when I was young, we used to make flight simulators," the legendary designer reminisced. "They kept getting more and more complicated. The cockpit started taking over more and more of the screen, and what you saw outside got less and less... But with every generation, some people said, this is getting to be too much for me, I won't buy it anymore. Eventually it just out-complexified itself."

To avoid this, he notes that a core doctrine of the Civilization series has been to remove a feature for every new one added. "With Civ, we're actually deliberately keeping the complexity at the current level, because that seems to be what people enjoy."

That's not to say that complex games are bad, but that a rush in that direction can undermine a potential audience. "You have to convince people they like strategy," Meier says. "It seems a little daunting at first, when you hear about Civ... But once you get them to try it, they see how it works and what kind of fun it is."

Game Theory: Why Star Fox Has No Legs, The Real Reason! MatthewPatrick13 6 Comments