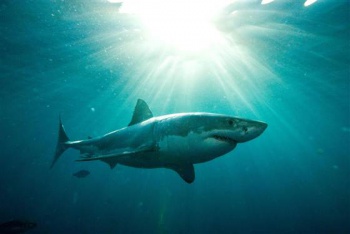 Hundreds of Australian sharks have been equipped with transmitters that trigger Twitter alerts when they get close to beaches.

If a shark could Tweet, what would it say? Surf Life Saving Western Australia has equipped hundreds of sharks with special transmitters, that can trigger a Twitter alert on the official SLSWA Twitter account when a shark gets too close to a beach. However, shark researcher David Shiffman believes that Tweeting sharks are no substitute for proper shark safety.

"Now it's instant information, and really people don't have an excuse to say we're not getting the information, it's about whether you are searching for it and finding it," SLSWA's Chris Peck said of the system. It works by taking an acoustic transmission from one of the 320 sharks, including some fearsome great whites, whenever a shark is within one kilometer of a beach. Receivers pick up the transmission, translate the information about the shark's breed, size and location, and automatically post it to the Twitter account.

David Shiffman, a shark researcher at the University of Miami, isn't sold on the scheme, saying "This can be a part of an overall effective safety plan, but the same general individual principles to making you safe (swim during the day close to shore with other people) will still be better." He pointed out that outfitting sharks with transmitters can be a relatively expensive proposition, and that if sharks aren't tagged, they can't be detected by the monitoring system.

It's important to note that despite Australia's reputation as a country where every animal is constantly trying to kill you, there have only ever been 892 documented shark attacks (of which only 217 were fatal) in the country's entire history.

So next time you're about to hit the beach, you may want to check your Twitter first.