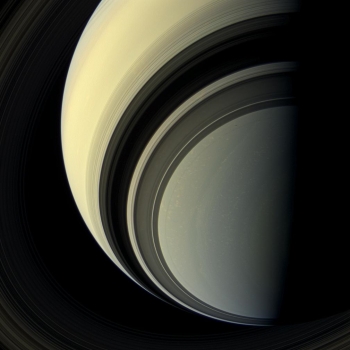 The Cassini imaging team released nine stunning images of Saturn and its moons Titan and Enceladus to remind us of the beauty of space this holiday season.

NASA's Cassini imaging team shared some beautiful images of Saturn and its moons Titan and Enceladus for the holidays. The Cassini orbiter has been exploring the Saturn system since 1997, and is expected to continue to deliver gorgeous images and groundbreaking science until 2017. In the release from NASA, Cassini imaging team leader Carolyn Porco says, "During this, our tenth holiday season at Saturn, we hope that these images from Cassini remind everyone the world over of the significance of our discoveries in exploring such a remote and beautiful planetary system."

You can make a strong case for Saturn as the most beautiful planet in our solar system. The gas giant's spectacular rings make it instantly recognizable, though Jupiter, Uranus, and Neptune also have ring systems. At Saturn's north pole its fascinating hexangonal cloud pattern, and at its south pole it boasts a hurricane-like storm wider than Earth that may be billions of years old. Its largest moon, Titan, has been the subject of intense study and speculation. Titan is the only object other than Earth (that we know of) with stable bodies of liquid on its surface. Larger than the planet Mercury, Titan is the only moon in our solar system with a substantial atmosphere, made up largely of nitrogen.

Enceladus, Saturn's sixth-largest moon, is an icy ball that may be the best place to look for extraterrestrial life. Like Jupiter's moon Europa, Enceladus is believed to have liquid water under its surface, but the surface ice on Enceladus is believed to be much thinner than the ice on Europa. Icy volcanoes at the poles jet water vapor and other gases out from Enceladus, falling back to the surface as snow or joining Saturn's rings as ice particles. Nearly everything we know about these objects is a result of the Cassini mission.

The Cassini-Huygens mission is a cooperative project of NASA, the European Space Agency, and the Italian Space Agency. The Jet Propulsion Laboratory, a division of the California Institute of Technology manages the mission for NASA.