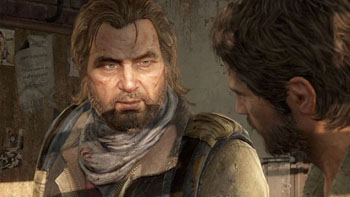 A survivor in The Last of Us joins GLAAD's list of "most intriguing new LGBT characters of 2013" for promoting the appearance of complex characters who aren't usually seen in media.

The Last of Us is one of 11 pieces of media awarded for including intriguing LGBT characters in a list compiled by GLAAD, a media-monitoring organization promoting LGBT representation. GLAAD notes that while the number of new LGBT characters fell on TV this year, some characters "broke molds and defied stereotypes."

The list is predominately for TV shows and movies, and The Last of Us was the only videogame included in the list. "There weren't many new LGBT characters to be found in mainstream videogames this year," GLAAD stated, "but one of 2013's most critically acclaimed featured a particularly interesting one." Videogames from AAA studios rarely include LGBT characters - whereas indie titles are much more likely to include minority characters - but The Last of Us included an interesting character named Bill, one of the characters the player meets over the course of the post-apocalyptic journey across the country.

Bill is a survivor with a talent for repairs, and he forms an uneasy alliance with main characters Joel and Ellie. Bill had a relationship with his partner, Frank, but at some point Frank leaves Bill. The player learns more about the relationship between Frank and Bill and discovers it was not a happy one by the end. "Both helpful and contentious, Bill is as deeply flawed but wholly unique a gay character found in any storytelling medium this year," the list states.