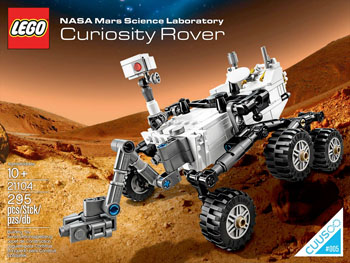 The Curiosity rover kit is one of several possible future space-themed kits available for voting through LEGO CUUSOO, the company's social creation platform. Visitors can suggest new LEGO products and vote for concepts. Once a concept reaches 10,000 supporters, LEGO will consider it for production as an official LEGO kit. Future kits could include the Apollo 11 Lunar Mission and the Hubble Space Telescope.

The Curiosity rover launched on Nov. 26, 2011 and landed in Mars' Gale Crater on Aug. 6, 2012 with the goal of investigating climate and geology of the planet as well as determining if the Gale Crater has ever had favorable environmental conditions. Curiosity was the first rover to drill into a rock on another planet, and it discovered consistent amounts of water in soil, even finding evidence of fresh water, proving Mars is less dry than previously thought.

The LEGO kit of Curiosity includes many of the actual car's features, such as the "rocker-bogie" suspension, which allows the rover to climb over obstacles up to twice the wheel's diameter in size.

The LEGO-produced kit will retail for $29.99. The next space-themed LEGO CUUSO project is unknown, but at over 6,700 votes of 10,000, the Apollo 11 Lunar Mission set appears to be a strong contender.