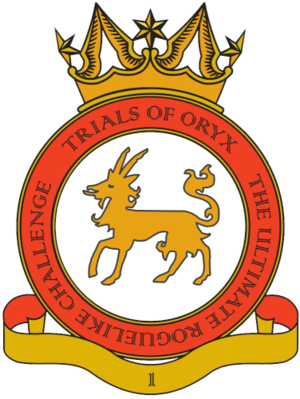 Glenn Wichman, one of the co-creators of the genre-defining 1980 dungeon crawler, helped chose the browser-based Adventuring Company as the best of 17 entries.

It's a good day for a game designer when one of the founders of a genre calls out your game for its quality. Glenn Wichman, one of the creators of 1980 dungeon crawler Rogue, almost certainly made the day for indie design team Slothwerks when he named their title Adventuring Company as the winner of the recent "Ultimate Roguelike" Contest. Rogue has influenced dozens of subsequent games, including recent titles such as Rogue Legacy and FTL. Wichman was on a panel of judges for the contest which also included Christopher "Oryx" Barrett, a Bungie art director who also creates tilesets for roguelike genre games, and Ido Yehieli, creator of dungeon crawler Cardinal Quest.

Designers were tasked to create their game using the Ultimate Roguleike Tileset, created by Barrett's company, Oryx Design Lab. In Adventuring Company, a browser-based game which can be played here, the player controls four adventurers exploring a dungeon. The catch is that new tiles are only revealed at the cost of gold, adding another resource management aspect to the Rogue formula. For winning the contest, Slothwerks received $500 and free game tilesets and sprites for life from Oryx Design Lab. The full list of winners from the contest can be found here.

This contest was only the first of the "Trials of Oryx" that Oryx Design Lab is hosting. A message on the company's website said the second trail will be announced soon.

UPDATE: As pointed out by reader Dr.Awkward, Oryx Design Lab has also remade the original Rogue. For those interested in trying it, the game can be downloaded here.

UPDATE: In an emailed response to The Escapist, Christopher "Oryx" Barrett said Adventuring Company was chosen due to being easy to learn, fun to play and feeling like a completed game. "It was a tough choice between the top three for sure, as they went very different directions," he wrote. "Overall, I was very impressed with the turnout and results of the first contest."

Ultimately, the judges felt Adventuring Company provided a unique and original take on the Roguelike formula. "Glenn in particular enjoyed the whimsical poetry, and the battle mode implementation," Barrett wrote. He didn't have a lot of details on the next Trial of Oryx but expected to announce it in the next few months. One option he is considering is tasking designers with the creation of a Lovecraftian horror game.