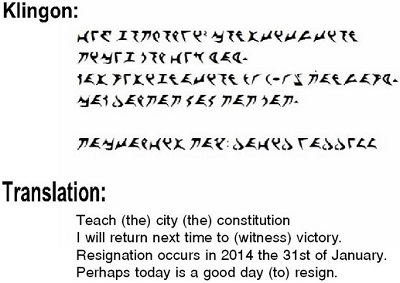 As memorable as the phasers, transporters, starships and "Khaaaaaaaaan!" in Star Trek were, it can sometimes be easy to forget that the various crews of the Enterprise occasionally also served as diplomats on missions that were a bit less flashy. That in mind, a politician from the town of Indian Trail, North Carolina recently decided to tap into a bit of Star Trek in his own life by submitting a letter of resignation penned in Klingon.

David Waddell, who was departing from the Indian Trail Town Council, apparently wrote the letter as a bit of an inside joke. "Folks don't know what to think of me half the time," he said. "So I might as well have one last laugh [while on the Council.]" Waddell was kind of enough to include an English translation with the letter but his act has still left some a bit miffed. Mayor Michael Alvaraz, for instance, was less than impressed. "It's an embarrassment for Indian Trail, and it's an embarrassment for North Carolina," he said.

Waddell is resigning from his seat on the council in part as a response to his frustrations with what he viewed as excessive development in Indian Trail, as well as perceived issues with the handling of requests for public information. He intends to continue attending board meetings as a private citizen while also initiating a write-in campaign for the Constitution Party.