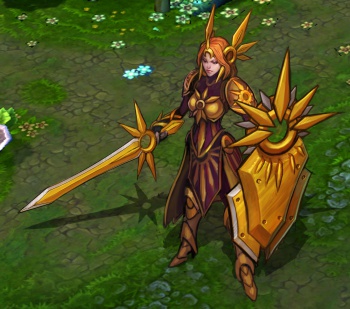 Riot Games Senior Concept Artist Michael "IronStylus" Maurino has shared a wealth of LoL designs that never made it into the final game.

Very few games can transition painlessly from concept stage to finished product, especially online titles that undergo regular updates and expansions. For proof of that, MOBA players need look no farther than the work of Michael "IronStylus" Maurino, a Senior Concept Artist at Riot Games. As a League of Legends character designer, and an active voice in the League of Legends community, Maurino has a unique insight into the creative processes behind LoL's many Champions. For example, in response to some LoL concept art that's been circulating on Reddit Maurino posted pieces from his own portfolio to show how character designs can change over time.

"I saw that awesome thread with a pile of older champion concept art which was dug up and I thought I'd dig through my own pile and show you (some of) the concepts I've worked on," Maurino wrote. "Big thing to notice: Things change a lot when it comes to concept art and character design. You're going to see a bunch of stuff we actually threw away, or iterated further upon depending on the situation of the particular development. Hell, you might even see something you think should have been in the released champion that didn't happen, but usually there was a good reason why it was changed."

A sample of the images are posted below, but Maurino notes they only comprise "a quarter of the characters that I've worked on that have seen the light of day". It's also clear that significant revisions were made to characters during development. The avian-inspired Quinn, for example, started out as a melee-based Champion before becoming the ranged-attacker that LoL players recognize.

Speaking as a outsider to League of Legends, I think this concept art looks pretty good, but Maurino himself would disagree. "Fun thing to keep in mind, a lot of this is awful," Maurino continued. "I think it's evident that a lot of my initial work was below the current quality bar of the company ... It makes me feel lucky that I'm a part of this team and that I've been given the opportunity to grow. We're all really lucky in that regard. I couldn't have improved at all if it wasn't for my amazing colleagues."