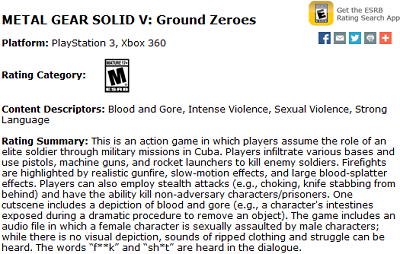 The Metal Gear Solid games are no stranger to the M rating. From the first entry on the PlayStation, the series has consistently courted the Mature rating both in its gameplay and cutscenes. Granted, this content has also been mixed in with persistent fart jokes and no small smattering of fan service, but by-and-by the series tends to skew toward adult audiences.

That being the case, the ESRB has recently released its rating for Metal Gear Solid V: Ground Zeroes and, not unexpectedly, it will wear the same M for Mature brand as its predecessors. What's notable however, is some of the content that got it there. While the game will feature the violence and "blood-splatter effects" fans have come to expect, it will also apparently feature "sexual violence," which is relatively rare when it comes to games.

According to the ESRB, "The game includes an audio file in which a female character is sexually assaulted by male characters; while there is no visual depiction, sounds of ripped clothing and struggle can be heard. The words "f**k" and "sh*t" are heard in the dialogue." No other information was included as to the context of the audio file or the characters involved. No matter the circumstances however, the very inclusion of what essentially amounts to a rape sequence, even in audio, is something that could invite controversy to the series and even conceivably have earned the game an Adults Only rating.

It would be hard to forget, for instance, the turmoil that surrounded Crystal Dynamics' Tomb Raider reboot when it was revealed that the game would include a segment that amounted to Lara being threatened sexually by a male foe. We wouldn't say that this kind of subject matter should be off-limits to games, but it is something that developers and writers should definitely handle with care. How exactly Ground Zeroes employs it, in turn, is something we'll have to wait and see.