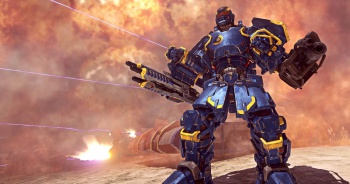 The modified Sony Online Entertainment subscription will allow users to access all SOE games under one payment.

The all access model will cost $14.99 per month and includes all of Sony Online Entertainment's online offerings for PC. Every subscriber to SOE PC games will be an all access member. Smedley noted in a follow-up on the subreddit that the company's goal is to include PS3 and PS4 SOE games, but it isn't "a done deal." For now, All Access will cost $14.99, and when a player subscribes to one game, all SOE online offerings will be available. Members will also have a 10% discount in marketplaces.

"That's a benefit most companies simply can't offer because they don't have our portfolio of games," Smedley wrote. "The goal would be to let you pick an item in each game you play... We've got a great lineup of games, some of which aren't announced yet that cater to a lot of players."

Smedley noted that a disparity exists for what SOE can do for promotions on PS3 and PS4 compared to PC. Promotional options for PS3 and PS4 are limited because the consoles don't use Station Cash, a virtual currency for SOE. When SOE has a sale on Station Cash for PC, "it's a pain in the neck" to deal with how to give a different promotion to consoles.

The All Access plan should be great for people who play several SOE titles on PC and want to keep payments simple. For members who do not prefer the new subscription model, Sony will offer refunds for the remainder of subscriptions.