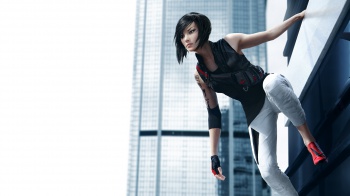 "I consider myself a casualty of [the Mirror's Edge] development process," Pratchett Tweets.

Mirror's Edge was an interesting title that didn't quite work, so when EA's Patrick Söderlund stepped forward in June last year and said a sequel was always going to happen, it came as a slight surprise to the rest of us. But even if Mirror's Edge 2 is on it's way, Rhianna Pratchett, who wrote the first one, isn't on board. She's a self-described "casualty of that [Mirror's Edge] development process," and wishes the new team all the best.

"Go with God, I say," she Tweets. "Create cool stuff. We always need more of that." When Pratchett came on the team, Faith was nothing more than a template; Pratchett created the character, and continued her adventures in the DC comic book version. Oddly enough, the comic was a prequel, and so is Mirror's Edge 2, but that doesn't seem to make a difference to EA; presumably the comic isn't canon.

Pratchett's sanguine about the whole thing. She knows she's just hired help, and nobody from the studio's talked to her in years, so she gave up on that possibility a while ago. "It was a difficult project for all," she Tweets, "and I no longer have any contacts [at DICE]."

EA's open-world Mirror's Edge 2 adventure hasn't got a release date yet, but when it does come out it will be for PC, PS4 and Xbox One.