The upcoming indie game hits big, despite being out for only a month. 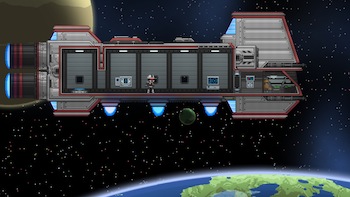 It's official: beta is the new 1.0. Between the success of Minecraft and Steam's Early Access program, people are totally cool with buying an unfinished game, as long as the company's upfront about it. Now, the sci-fi RPG/sandbox game Starbound has already sold one million copies, despite not having officially launched yet, or even being out for very long.

Since December 4th, players can get early access to Starbound on Steam for $15, the normal price of the game. Long before that, the developer, Chucklefish, was selling pre-order bundles on its own website. Similar to a Kickstarter campaign, prospective players could either pre-order the game at its normal price, or donate more cash, with tiers extended upwards of $2000. Using this method alone, it raised more than $5 million dollars. Once you factor in the huge number of copies sold on Steam, Starbound has already made more cash before launch than most indie games can ever hope to raise over a lifetime.

If for some reason you're not counted among those one million, Starbound is a sci-fi RPG with lots of exploration and crafting. Think Terraria in space, but with a storyline. If that piques your interest, you can still hop onto the bandwagon, either via Steam, or Chucklefish's website. After all, there are always more stretch goals to hit!

Starbound doesn't have a set release date yet, but you can expect word to come as it slowly evolves towards a more finished state.