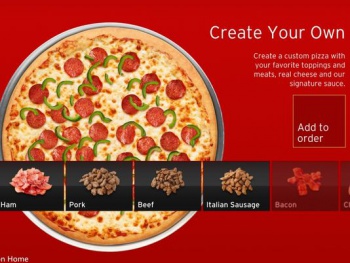 Remember when Pizza Hut launched a dedicated app for the Xbox 360 last year? Well, it seems that was a smart move by the pizza chain, as it has now sold over $1 million in pizzas through its Xbox 360 app in just four months.

Speaking to Polygon, Pizza Hut director of public relations Doug Terfehr states, "It's been a source of unbelievable growth for us," and adds, "Just the explosion of people who wanted to download it, experiment with it, play with it with Kinect. As soon as we did one, everyone was contacting us to do the next [one]."

So, does this mean Pizza Hut will be expanding to other videogame platforms soon? Pizza Hut reps wouldn't say when asked, but did reveal, "Conversations continue to be ongoing with us. Wherever you are, we want to be."

Are you one of the many Xbox Live users who ordered pizza via the Xbox 360 app? If so, how was it and would you want a Pizza Hut app for the Xbox One and PlayStation 4, too?