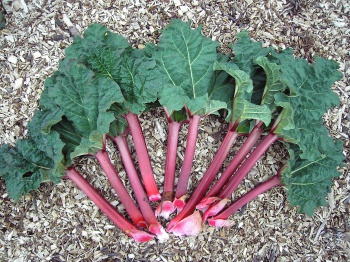 The large-scale batteries that support power grids might one day be made using organic compounds from everyday gardens.

Batteries are a staple of our modern existence, whether you're drawing electricity from an iPhone battery or using a backup generator to power a building. Unfortunately as electricity demands increase so do the demands on these batteries, and they tend to wear out from time and continuous charging. Thankfully, Harvard scientists have developed a new kind of battery that's cheap, renewable, and even capable of functioning on a power-grid scale. What's especially surprising is that the compounds behind this battery are so common when once the snow melts, you could start growing the raw materials in a small garden.

According to today's issue of Nature, Harvard scientists have produced a flow battery using non-metal organic compounds. The secret ingredients behind these batteries are quinone compounds, which happen to be abundant in green plants and rhubarb. Even better, unlike metal reliant flow batteries that usually cost $700 per kilowatt-hour to produce, the quinone version costs $27 per kilowatt-hour and can be manufactured relatively quickly for large-scale use.

"The whole world of electricity storage has been using metal ions in various charge states," said Harvard Researcher Roy G. Gordon, "but there is a limited number that you can put into solution and use to store energy, and none of them can economically store massive amounts of renewable energy. With organic molecules, we introduce a vast new set of possibilities. Some of them will be terrible and some will be really good. With these quinones we have the first ones that look really good."

The technology behind organic flow batteries requires more testing, but the team is already thinking big. Lead researcher Michael J. Aziz has suggested that these batteries could supplement renewable energy sources like wind and solar generators, providing back-up power when it's cloudy or if the wind isn't blowing.

"The intermittent renewables storage problem is the biggest barrier to getting most of our power from the sun and the wind," Aziz said. "A safe and economical flow battery could play a huge role in our transition off fossil fuels to renewable electricity. I'm excited that we have a good shot at it."

Personally, I'm just amazed that the molecules capable of harnessing large-scale renewable energy can also be found in a delicious strawberry-rhubarb pie.