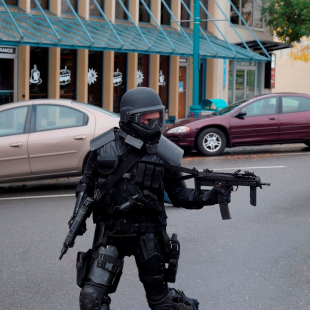 Uwe Boll, the filmmaker behind game-to-film adaptations like Postal, House of the Dead and In the Name of the King, has announced a sequel to his 2009 mass murder film Rampage.

In the world of gaming Uwe Boll is perhaps best known for taking game franchises with otherwise serviceable or even decent stories and transforming them into the film equivalent of septic runoff. That being the case, Boll has produced a few films that arguably prove that, while he isn't necessarily a man with good taste, he can at least produce competently put together work when he actually puts in the effort.

Key among these would be Rampage, which chronicles the break down and eventual mass murder spree of Bill Williamson, played by Brendan Fletcher, a mechanic living in a fictional Oregon town. While a movie pretty much made for the sole purpose of inviting controversy, it's nonetheless a competently composed look at the procedure of someone snapping and doing something monstrous.

Now, Boll has announced that a sequel is in the works. While there haven't been too many details divulged as of just yet, Rampage 2 will apparently see the return of Fletcher's character who, this time, will take over a TV station and hold its employees hostage in a bid to project his political views. The film is set to be shot over the course of six days in Maple Ridge, British Columbia and will also feature performances from Lochlyn Munro, Mike Dopud and Michaela Ross.