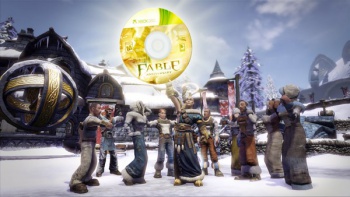 Lionhead Studios has announced on its blog that Fable Anniversary for the Xbox 360 has gone gold well ahead of its February 4 release date. For those not familiar with the term, a game entering "gold" status means that physical copies are being pressed and sent to retailers in preparation for the title's release. Additionally, the studio has also revealed the pre-order bonuses for Fable Anniversary that will be available at select retailers, which we've listed below.

Peiratēs Outfit - Peiratēs was a famous plunderer, known for travelling uncharted waters to take entire cargo ships hostage for their most expensive items. He was also known by the name "Pete" in less formal circles.

Snowspire Guard Outfit - Made from genuine horse hair, this outfit is said to calm even the most vocal of criminals.

The Jackarse - An age-old popular pasttime was run by a chap named Jack, who used to slap people around the face with a dead fish until they fell onto their arse. The rest, as they say, is history...

Apollo's Outfit - Apollo is the pseudonym for the leader of The Grey Company, the man responsible for monitoring Lady Grey's financial investments. As fearsome as that may sound, he had a reputation for being incredibly nice, often using his own money to bail out any villager that couldn't afford that months rent.

Apollo's Crossbow - Based on a centuries old concept, Apollo wanted to create a modern crossbow with the feel of a relic from the past - and thus this crossbow was born. Dependable in combat, but also pretty tasty to look at.

Check your preferred retailer to know which pre-order pack they're offering for Fable Anniversary. Just in case you want to get all the pre-order items, Lionhead has also announced that the pre-order goodies listed above will be available for purchase on the Xbox Game Store later this year.

Set for release this February 4 for the Xbox 360, Fable Anniversary is an HD re-mastering of the original Fable and includes The Lost Chapters.