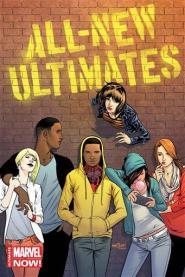 The current Cataclysm mini-series will usher out the current Ultimate Marvel universe "at great sacrifice," according to Marvel's Brian Michael Bendis.

The Ultimate Marvel line will see it join the ranks of the Marvel NOW reboot line this coming spring, following the world-changing events of the Cataclysm mini-series. That series is due to wrap up soon, and follows the heroes of the Ultimate Marvel universe as they try to stop Galactus from turning the Earth into his latest snack. "They're able to win the day, but at great sacrifice, a sacrifice that is so huge that it changes the entire landscape," said Marvel writer and Ultimate line architect Brian Michael Bendis. "It creates a place that demands a fresh start from everyone who surveys it."

And for those wondering if the relaunch means Ultimate Marvel will shy away from its tradition of killing off characters and keeping them dead, editor-in-chief Axel Alonso reaffirmed that in this universe "dead is dead." "The long and short of it is this: The Ultimate (universe) benefits from a good, old kick in the butt," he continued.

In recent years, the Ultimate Marvel line is perhaps most famous for killing off Peter Parker and replacing him as Spider-Man with new character Miles Morales, an event which occurred in the pages of Bendis' own Ultimate Spider-Man. Morales is set to return for Marvel NOW in the pages of Miles Morales: Ultimate Spider-Man, once again written by Bendis with artwork by David Marquez. Morales will also play a role in the series All-New Ultimates, written by Michael Fiffe and drawn by Amilcar Pinna. A third announced book, Ultimate FF, will focus on the Future Foundation and super scientist types such as Sue Storm and Tony Stark. Writer Joshua Hale Fialkov teased that there will be at least one more member of the team "and that one happens to be a psychopath." Ultimate FF will be drawn by Mario Guevara.

This is actually the second such relaunch of the Ultimate Marvel line in recent years. The first came about in 2011, when the series was rebranded as Ultimate Comics, following Bendi's Death of Spider-Man storyline.