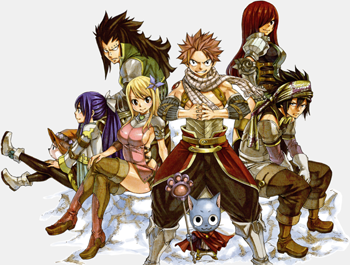 A new official site and Twitter feed launched to hype the return of Fairy Tail in April.

The long-running fantasy action series Fairy Tail returns in April with a sequel after it ended its run in March 2013. Launched Jan. 7 is a Twitter account (Japanese) for the TV series and an official website (Japanese).

The website is fairly bare at the moment, but upon loading several panels illustrate all of the varied Fairy Tail characters. The sequel will begin where Fairy Tail left off last year and will continue to follow the original manga's plot.

Some of the staff members have changed; Shinji Takeuchi (Gintama) has replaced Aoi Yamamoto as character designer, and one of the animation production studios Bridges (Mitsudomoe) has replaced Satelight. A-1 Pictures (Sword Art Online) remains as it has been in animation production. Director Shinji Ishihara reassured Fairy Tail fans that the anime's quality had increased with the change in staff. The original series' voice actors will all return for the sequel TV series.

Fairy Tail is a wizards' guild known for its members' destructive behavior. Lucy Heartfilia runs from home to Fairy Tail and meets Natsu Dragneel, and after some antics, Lucy joins the guild. The first TV series ended at 175 episodes and had several OVAs (original video animation) and an animated film. FUNimation owns the rights to the first TV series, which debuted in North America on the FUNimation channel in 2011.