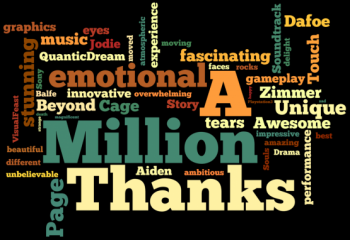 Quantic Dream confirms over one million copies of Beyond: Two Souls has been sold through to consumers last year.

Quantic Dream's latest game, Beyond: Two Souls, has already sold through over a million units, the studio has announced over on its official site. By "sold through," it means sold to consumers and not just copies bought by retailers to replenish their stock. In the same update, Quantic Dream posted an image that highlights some of the words reviewers -- and fans -- have used in describing the action-adventure game.

That's not all, studio co-CEO Guillaume de Fondaumiere even went on Twitter to reveal that Beyond sold 70,088 units in France last year, which is better compared to how Heavy Rain fared in its first 12 weeks in the country.

While this might not seem like much compared to sales of Call of Duty or other established franchises, it's important to note that Beyond: Two Souls was only released on one platform and right at the cusp of the PlayStation 4 and Xbox One's release, which couldn't have helped.

For more on Beyond: Two Souls, take a look at the "Advanced Experiments" DLC, which might remind you of a certain game from Valve.