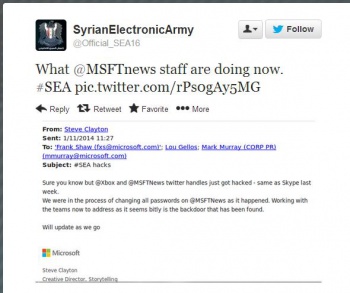 If you're following the official Microsoft News, Xbox and Xbox Support Twitter accounts, you might have noticed odd tweets from the lot earlier today. Long story short, the three accounts were hacked by a group named the "Syrian Electronic Army, which tweeted the following message via the official Xbox Twitter, "Syrian Electronic Army Was Here via @Official_SEA16 #SEA"

If that wasn't enough, the group then hacked the official Microsoft News Twitter and even publicly shared an internal email between Microsoft employees regarding the breach.

At the time of this post, all three hacked Twitter accounts are once again in the control of Microsoft. This latest hack comes just weeks after a hacker group called "DERP" attacked and brought down the servers for League of Legends, EA, and Blizzard due to an alleged feud with a Twitch streamer.

It begs to be asked, but why do this in the first place? What is the group trying to accomplish? Is this a show of power or just a group of people fooling around?