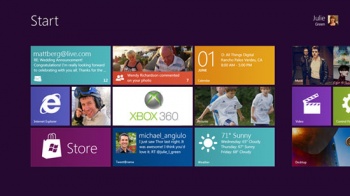 Microsoft will allegedly unveil its vision for Windows 9 at the company's Build 2014 developer conference this April.

Have you made the switch to Windows 8? If not, you may just want to hold out another year. Windows watcher Paul Thurrott reports that work is already well underway on Windows 9, which is currently being prepped for an April 2015 launch. Thurrott claims Microsoft will reveal the new operation system, currently code-named "Threshold", at the company's Build 2014 developer conference this April.

Windows 8, the successor to Windows 7, was released just 14 months ago, in October 2012. Suffering from the "even-numbered Windows curse", it faced some pretty harsh criticism, particularly in relation to its radical "Metro" re-design of the start menu. Some of these criticisms were addressed in its first major update, Windows 8.1, and a planned "Update 1" for the OS should address more.

Nonetheless, it seems Microsoft is very keen to distance itself from Windows 8's negative feedback, and start over with a whole new number. "This is the release my sources previously pegged as being the one that will see the return of the Start menu and the ability to run Metro-style apps on the desktop alongside desktop applications," says Thurrott.

I'm still using Windows 7, and unless Microsoft literally forces me to upgrade, I'm quite content to stick with it. I was also one of those people who completely avoided Vista, jumping straight from XP to 7. How about you?