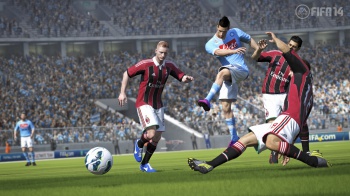 FIFA 14 retains top spot in the UK charts, and in an odd twist, Aliens: Colonial Marines cracks the top 10.

Even if we're in a new year, a few things haven't changed and that includes FIFA 14's domination in the UK charts. EA's soccer sim is once again the top game for the fourth straight week and it's seventh overall. Joining FIFA 14 in the top five are the usual suspects such as Call of Duty: Ghosts, Battlefield 4, Assassin's Creed IV and Grand Theft Auto V.

The top 10 games are listed below.

For reference as to how the top five games did last month, Call of Duty: Ghosts' sales dropped 41%, while Battlefield 4 and Assassin's Creed IV plummeted 48% and 52% respectively. Interestingly enough, SEGA's new price point of £5 for Aliens: Colonial Marines seems to have paid off, as the controversial shooter managed to crack the top 10.

In case your curiosity has been piqued, here's The Escapist's review of Aliens: Colonial Marines where it mentions, "the game's most memorable trait is how often it manages to fall short of greatness."