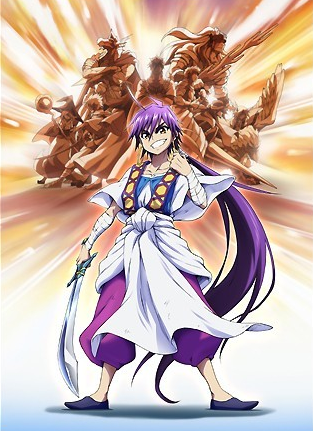 The anime adaptation will cover the spinoff manga Magi: Adventure of Sinbad.

Publisher Shogakukan announced yesterday that an anime adaptation of the spinoff manga Magi: Adventure of Sinbad will be bundled with the special edition of the third compiled volume, available in Japan on May 16.

Shogakukan released a 15-second trailer announcing the greenlight of the anime adaptation. Special information about it will be published in the second compiled volume, which will ship in Japan on Jan. 17. A 70-page prototype of the manga was bundled with the first Blu-Ray disc of the anime in January 2013, and two months later it was revealed that it would become a full manga series. The manga began publication in Weekly Shonen Sunday and was moved to Ura Sunday.

Sinbad is a Dungeon Capturer, someone who clears labyrinth-like buildings ruled by Djinn. When someone survives a dungeon, that person can acquire magical items. Sinbad, 29 years old at his debut in Magi, is a major character of the series and captured his first dungeon at 14.

The anime adaptation of Adventure of Sinbad will probably be an OVA seeing as how it will be bundled with the third manga volume. Aniplex of America is the English publisher, but it might not bother with an OVA. The manga spinoff has not been published in English.