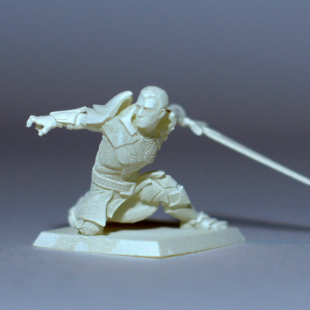 Hero Forge hopes to raise $95,000 to fund a custom RPG miniatures service backed by 3D printing and easy to use character creation tools.

Easily one of my favorite parts of RPGs in the realm of videogames are character creators. Creating a character just tends to focus me on the potential of the coming adventure and excite me about the experience that lies ahead. Where I run into trouble is when my role-playing heads to the tabletop. While a blank character sheet is, in many ways, a similar wellspring of possibility, I've come to loathe the process of finding miniatures. It's not that there aren't good options, mind you. The problem is that when I create a character I have a mental image of them that some generic mini is never going to be able to capture.

Enter the folks at Hero Forge who, using funds raised through a recently launched Kickstarter, hope to give tabletop gamers character creation options fairly similar to those provided in many videogames. Customers will apparently be able to use a 3D interface equipped with a smorgasbord of racial, facial, body, clothing, armor and weapons features to build a unique character. You'll then be able to choose a pose and the size of end product and print your own custom miniature from a variety of optional materials, all of which should cost between $15 and $25. "We're bringing a high-tech update to a classic analog hobby and giving you the opportunity to breathe your vision and creativity into your miniature," said the team on its Kickstarter page.

Hero Forge's campaign is aiming to raise a total of $95,000. The funds will be used to "turn our library of concept art into one of the coolest, most diverse digital armories on the internet" and to further develop Hero Forge's planned user interface. As of this writing it still has 33 days left to go and has already nearly broken $60,000. You might excuse then for feeling safe in saying it's probably going to succeed, and then some.