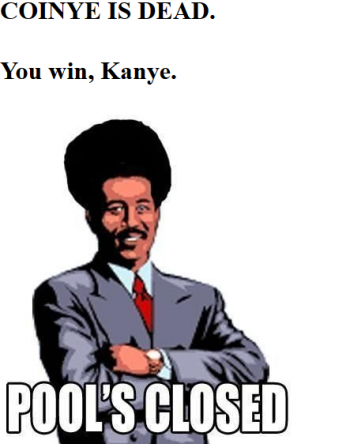 The rapper filed a lawsuit, and the Bitcoin wannabes folded. Or did they?

Alas, poor Coinye, a fellow of infinite jest, has proved vulnerable to lawsuits. The Bitcoin wannabe was hit with a 124-page suit courtesy of Kanye, whose image it had tried to usurp. That would seem to be the end for Coinye, whose website now shows just one melancholy message: you win, Kanye. Pool's closed.

The lawsuit targets 0daycoins.com, coinye-exchange.com, newchg.com, "Jane Does 1 through 50," "John Does 1 through 50," "Fnu Lnu a/k/a Jonny Bravo," Dogecoin, and Amazon - Amazon because that's where the Coinye site's hosted, Dogecoin because Kanye's lawyers believe it hosts Coinye trading websites - and accuses them of "wilful trademark infringement, unfair competition, dilution, and rights of publicity violations among a score of other blatant statutory and common law violations." Kanye's particularly upset that Coinye usurped his name and likeness, and that the defendants "cowardly remained anonymous."

There's no way that anyone can look at Coinye and not think Kanye, the rapper alleges, since practically every news article about the cryptocurrency has mentioned Kanye's name, or displayed a photo of him. "With every day that passes," the lawsuit alleges, "Mr West's reputation is irreparably harmed by the continued use of the COINYE WEST, COINYE and/or COYE marks in connection with the Defendant's goods and services. Defendants have admittedly and wilfully infringed upon the KANYE WEST mark and consumers are likely to mistakenly believe that Mr. West is the source of these digital coins." Kanye seeks triple damages because of the "willful nature" of the infringing acts, as well as all profits from Coinye.

In response, the Coinye creators appear to have fled into the digital night. However it's possible the coin may revive in some other form. The originators appear to have passed their stuff - the Twitter feed, website and other digital assets - on to other Bitcoin hopefuls, some of whom seem to want to carry on the fight.

"We are trying to avoid any lawsuit," says one of the alleged not-Coinye organizers. "And we are not US-based. So they'd have to go through inter land laws."