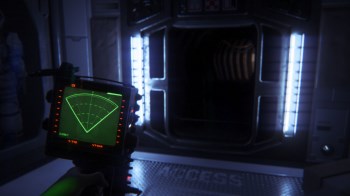 Alien: Isolation developer Creative Assembly has come out to assure fans hoping to pick up its survival-horror Ridley Scott love letter on the Xbox 360 or PS3, that the "the core experience" of the game will be "identical" to those who choose to buy it on the PC, PS4 or Xbox One. Furthermore, they suggested that the current gen versions will be graphically comparable to next-gen, going so far as to say that earlier in development, "We used to be able to put them side by side and play guess the platform".

Creative lead Alistair Hope explained how the game's console development originated on Xbox 360 and PS3, and that early in development they looked almost identical. "We've been able to squeeze every last bit of power out of those old machines," he bragged.

He did admit that as they got later versions of the next-gen hardware, they were able to step up the next-gen versions a little, to the point where its easier to tell the difference across generations. "The core experience is identical, though," he stressed.

"For many years, the PS3 and 360 builds were our only console builds, so it was important to us that they would be great. That's why it's all done in-house," he continued.

Alien: Isolation is a survival horror game, announced this week, that is based off Ridley Scott's original Alien movie. It will be releasing on the PS3, Xbox 360, PS4, PC and Xbox One, but strangely, not the Wii U.

Hope seems to be pretty happy that he's able to make the current-gen versions look so good, but to me, this doesn't bode well for the next-gen versions. After all, what's the point in shelling out for a shiny new console if the games play exactly the same, and only look marginally better?