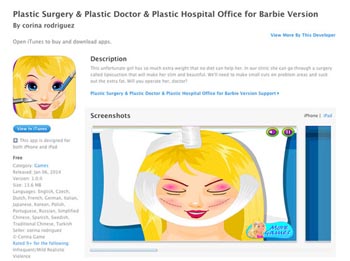 An unofficial Barbie game about plastic surgery was marketed to children and taken down after Twitter protests.

Apple and Google removed two similar games about plastic surgery in which children are encouraged to "fix" a patient through liposuction from the iTunes App Store and Google Play. Twitter users launched a campaign on Jan. 14 to bring awareness of and call for the removal of Plastic Surgery & Plastic Doctor & Plastic Hospital Office for Barbie and Plastic Surgery because of the game's harmful messaging and marketing to young girls.

Pulled from the iTunes App store and Google Play on Jan. 14, Plastic Surgery for Barbie's description reads, "This unfortunate girl has so much extra weight that no diet can help her. In our clinic she can go through a surgery called liposuction that will make her slim and beautiful. We'll need to make small cuts on problem areas and suck out the extra fat. Will you operate her, doctor?" The game is marketed to players at least nine years old and uses the familiar presence of Barbie to entice young girls to play the free app.

A similar game pulled had a similar description but instead uses a character named Barbara, depicted like Mattel's Barbie, who "likes to eat a lot of burgers and chocolates and once she found that she looks ugly." The plastic surgeon will "make operation on her body and face in order to return cute Barbara's look."

Everyday Sexism, a campaign that documents examples of daily sexism, tweeted pictures of the apps, asking Apple and Google to remove them. Both were removed.

A Google spokesman said the company does not comment on individual apps, "but will remove apps that breach our guidelines." Apple has not issued a statement.

The former president of the British Association of Aesthetic Plastic Surgeons told the BBC the games' rhetoric is damaging to women. "This app blatantly and shamelessly uses child-friendly brand names to target young, vulnerable children and exposes them to sexist and disturbing rhetoric as the 'game' critiques the body of a cartoon character who does not conform to an unrealistic beauty standard," he said. "That Apple or Google could condone this disgraceful app as a game suitable for children is no less than sickening."

Toy manufacturer Mattel issued a statement, distancing itself from Plastic Surgery for Barbie, which did not have authorization to use Barbie's branding. "This app has since been removed from iTunes," Mattel stated. "At Mattel, we take our commitment to children seriously and work hard to ensure there are no unauthorized uses of our brands that may be unsafe or inappropriate for children."