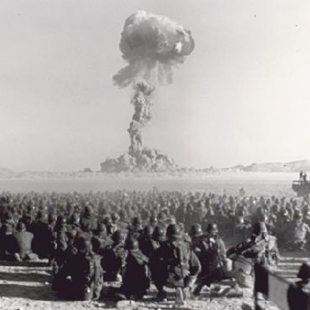 Mathematician Michael B. Dillon has published research to help spread knowledge on how to survive a nuclear war.

One of my longest standing fears is of being caught in a nuclear explosion. You can blame Terminator 2 for that. Granted, you should probably lay it on my parents for letting me watch it at the tender age of six, but even had I been older I'm pretty sure its nuclear attack sequence would have left me pretty freaked out. Suffice it to say that I spent years scared that someone was going to drop a nuke on me despite the fact that I lived in Canada, probably the last country in the world people want to bomb.

Despite this being a persistent fear of mine however, I'm still pretty clueless as to what I would actually do if I was out buying donuts and someone actually did drop the big one. And I'm far from alone. Despite the Cold War, terrorism and cheating missile controllers, most people would be in the same doomed boat as me. To Michael B. Dillon this was a problem that had to be solved. So he did.

A mathematician, Dillon used his skills to research and calculate effective shelter strategies to help people in nuclear war zones maximize their chances of avoiding the after effects of a nuclear war. The key, according to his research, is knowing the quality of your current shelter, the location of better shelter and how quickly you need to move after the feces hits the fan. "For the case in which individuals move to an adequate shelter that can be reached within 15 min, individuals should stay in a poor-quality shelter for at most 30 min after the detonation," wrote Dillon. "If adequate shelter is available nearby (within 5 min), then poorly sheltered individuals should immediately proceed to the better shelter." The full extent of Dillon's findings can be found in his report. Take a peek and then maybe spend some time considering your own options. After all, we never know when the robots are going to turn against us.