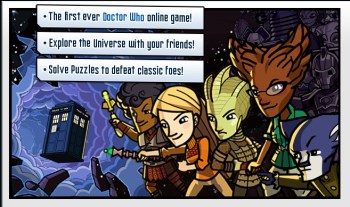 Doctor Who: Worlds in Time, the MMO that launched in early 2012, will bid a final farewell at the end of February.

I had absolutely no idea that there was a Doctor Who MMO, but it sounds like a pretty fantastic idea. One of the great things about Doctor Who as a game setting is that you can do literally anything you want with it, and there's already such a huge catalog of material - enemies, allies, strange worlds and familiar places - that you could go for years without any worries of running out of fresh content.

It doesn't seem like that's quite what Doctor Who: Worlds in Time was all about, though. It was instead more of a browser-based puzzle game, and while it was fairly well-received by the few critics who looked at it - Kotaku called it "delightful" - the gameplay and kid-friendly cartoon style apparently didn't catch fire with fans of the franchise, as it has announced the end of operations as of February 28.

It actually looks not terrible as a very casual online game (although it's a bit slow loading new areas) and it's still possible to create an account and play if you want to see what it was all about, but the microtransaction store is offline so you'll have to earn your sonic screwdriver the hard way. Check it out for yourself at doctorwhowit.com.