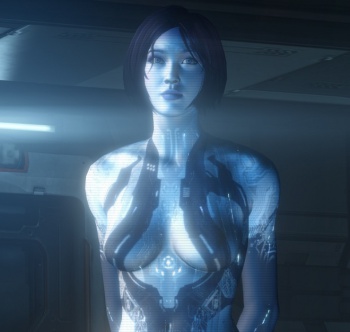 Soon you'll be able to feel like Master Chief himself as you order your phone's AI to call for pizza.

When Microsoft decided to make "Cortana" the codename for its voice command feature, it really wasn't kidding. The app, which will serve as Windows' answer to Apple's Siri, will do pretty much everything you'd expect, but with a little extra flavor for Halo fans. Alleged Microsoft source MSFTnerd reports that Jen Taylor, the voice actress for Master Chief's AI partner, will be lending her voice to the feature for its launch later this year.

This is great news for anyone who has ever dreamt of using a vastly powerful sci-fi intelligence to check the weather (and really, who hasn't). Unfortunately, it looks like the key phrase to activate Cortana is "Bing, tell me [blank]" which might break the illusion somewhat.

Cortana is scheduled to begin its (her?) first beta this April on Lumia devices, and will then spread to other platforms including the iPhone, Xbox One, and Windows operating systems. Non-mobile platforms might not get the technology until 2015, though, with the timeline for a global launch reaching as far as 2016.

Cortana is a pretty solid voice assistant, as far as these things go. Although, if Valve came out with a competing app complete with voice acting from Ellen McLain as GLaDOS... that would be a tough decision.