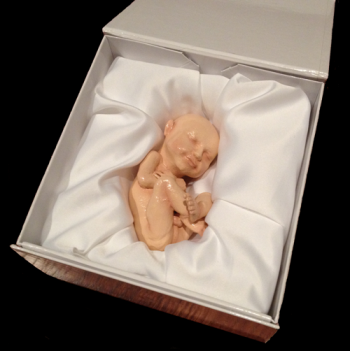 "Your 3D Baby will be a treasured family remembrance of your pregnancy and new baby," claims company 3D Babies.

Having a baby changes people, this is true, but you would hope there are certain boundaries we would still know not to cross. Getting an ultrasound of your unborn child? Heartwarming. Spending several hundred dollars on a realistic, 3D printed model to cradle before the kid is even born? That's...a little more extreme.

Company 3D Babies, however, is convinced that people are going to want such a service now that 3D printers are all the rage. For $600, they will take an ultrasound and turn that image of your soon-to-be bundle of joy into a life-sized fetal sculpture that can be used later to terrify the youngin' during their formative years and scare away any dates they bring home during high school.

For the more budget-minded connoisseurs of fetal sculptures, 3D Babies also offers mini baby models for $200 and half-size baby models for $400. And for those of you who think having a model of your own child is just too humdrum, 3D Babies also sells a miniature model of North West - as in the infant daughter of Kanye West and Kim Kardashian - for a mere $250. Because if you're the kind of person to drop several hundred bucks on a fetus model, why stop at just your own kid?