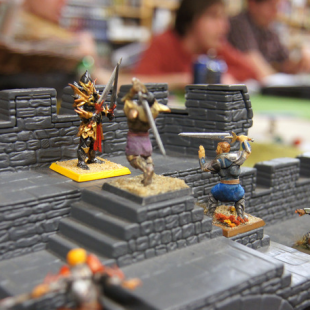 Hero Forge has reached its Kickstarter goal and is now aiming to meet its stretch goals to unlock more miniature options for customers.

You may recall a few days when we tipped you off to the Kickstarter campaign for Hero Forge, a service that would provide customers with an easy-to-use user interface to assemble and 3D-print their own tabletop miniatures. At the time of our original story, Hero Forge was well on its way to success with nearly $60,000 of its $95,000 goal raised. We're now happy to report that it broke that goal yesterday and, in the time since, has gone on to raise another $30,000 extra.

"In less than seventy-two hours we've reached our base funding goal, which means that customized, 3D printed minis will soon be an option for tabletop gamers everywhere," said its Kickstater in a recent update. "We know that this is going to break new ground for the miniatures market, and we're so incredibly happy to have all of you along for the ride!"

With its Kickstarter now a bonafide success, the Hero Forge team is hoping to raise funds to reach its stretch goals. Its first two stretch goals, unlocking additional race and mount options for its minis, have already been met. Its third stretch goal, which will add in science fiction setting options, is the campaign's current goal. Unlocking said sci-fi options will require $150,000 in total contributions. With less than $30,000 left to raise and 31 more days to do it, we can definitely see the campaign reaching that final benchmark (and then some) before it ends.