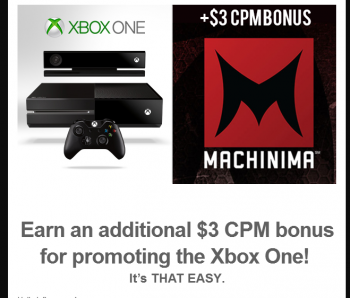 Microsoft is now offering Machinima video producers $3 per 1,000 views in exchange for promoting the Xbox One

Just in case you didn't know, YouTube videos showcasing video games has exploded the last couple of years and has become a viable platform for companies to advertise in -- a fact not lost on Microsoft. Machinima, possibly the biggest YouTube network that focuses on games as its content, is now the latest beneficiary of Microsoft's latest marketing blitz, as it's now offering Machinima producers $3 per 1,000 views -- or "Cost Per Thousand (CPM)" -- just to promote the Xbox One.

Details of how this partnership works can be read below from an internal email circulating within Machinima video producers.

Machinima is happy to offer YOU a $3 CPM bonus when you participate in our continued promotion for the Xbox One!

It's easy! Here's how:
1. Incorporate at least 30 seconds of gameplay of footage of ANY Xbox One game
2. Verbally mention in the video that you are playing on the Xbox One
3. Tag your video with XB1M3
4. Follow the guidelines listed in the assignment
5. Submit the LIVE YouTube link through Poptent

The campaign will start on January 14th and will go until February 9th, or until a collective 1.25 million views have been reached

While $3 might not seem much, keep in mind, this sum is a bonus on top of what video producers make per CPM, so it does add up. In your opinion, does this compromise the integrity of some YouTube video producers when it comes to gaming coverage?

For the latest in Xbox One news, Microsoft announced that its next-gen console managed to move over 900,000 units last month, and Major Nelson says it's time to end the console war hate.