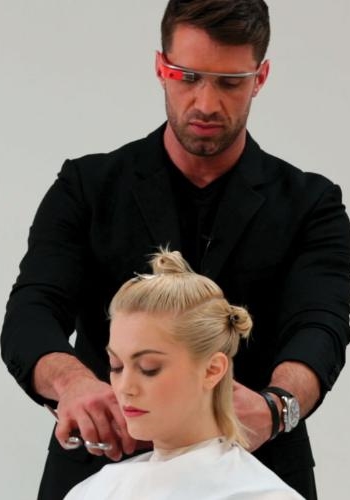 Hair styling tutorials aren't rare on YouTube, but L'Oreal's collaboration with Google Glass offers a different perspective for the would-be hair stylist. L'Oreal subsidiary Matrix announced January 17 that it would be producing a three-part program titled Matrix Class for Glass. First, Matrix will produce a series of in-depth video tutorials using Google Glass. Second, celebrity stylist George Papanikolas will introduce the Matrix Eye for Style Chair at The Andy LeCompte Salon in Los Angeles, where clients will receive a video copy of their hair styling session, to serve as an at-home tutorial. Third, a series of online classes in hair cutting, coloring, styling and finishing will be produced, for use by professional stylists and amateurs alike. L'Oreal will also be releasing a Google Glass application in late spring 2014.

Recreating a salon hairstyle at home can be difficult, and anyone who has tried has likely wished they could have seen exactly what their stylist was up to behind their head. Plus, hairstyling students will likely benefit greatly from being able to directly see the perspective of skilled stylists. Hairstyling is just one skill that could benefit from tutorials made with Glass. The project isn't the first time that L'Oreal has used Glass. It used the wearable computer to cover Mercedes Benz Fashion Week in Madrid last year.

The intersection of wearable technology and fashion is getting fuzzy, and it's not likely to stop any time soon. After all, there's no reason you can't have the latest tech and look good wearing it. Smart watch maker Pebble recently revealed the swanky Pebble Steel, and CSR recently unveiled smart jewellery prototypes that communicate with iPhones using Bluetooth and alerts the wearer to new notifications on their phone. I'm looking forward to pants that send me a text message when they need to be washed.