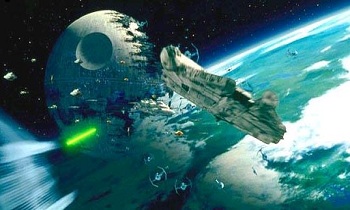 Director J.J. Abrams says that Episode VII's script is finished and that the production is currently in "deep prep."

With Star Wars: Episode VII slated for a not-too-far-away release in December of 2015, some have harbored concerns about whether or not the film will have enough time to be crafted into the high quality product that fans so desperately want it to be. That being the case, director J.J. Abrams, commenting on the film at TCA 2014, has revealed that at least one important element of the new movie is complete: the script.

"We're working really hard and we've got our script and we're in deep prep," said Abrams. "Full steam ahead, y'know." This will likely come as welcome news to anxious fans, though not without some caveats. Recent rumors, for instance, have pegged story disagreements as the cause behind the departure of Michael Arndt, Episode VII's original screenwriter. According to anonymous sources, Arndt disliked Abrams supposed insistence on the aging cast of the original Star Wars trilogy front and center in the new film. Many fans and critics echoed that reported displeasure.

Nonetheless, with much of the news about the film often being restricted to rumors, it's just nice to be able to confirm some progress. That said, it would seem that not all of the rumors coming out are completely baseless. In addition to commenting on the script, Abrams also confirmed that he has indeed met with Breaking Bad actor Jesse Plemons. It makes us wonder how much else that we've heard might be true.