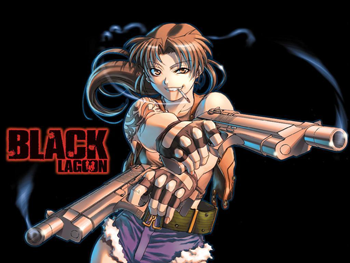 The most recent Black Lagoon manga volume was published in Japan in October 2009.

Black Lagoon is a team of mercenaries who smuggle goods around Southeast Asia in the mid-1990s. Rock is a Japanese businessman who is kidnapped by Black Lagoon, but he ends up joining the company where he puts his skills of negotiating to use. He's at odds with the violent methods Revy, the muscle of the group who grew up in New York City. Her enjoyment of killing and skipping of negotiations clashes with Rock. Hiroe has stated he drew inspiration from Quentin Tarantino and Stephen King and piracy cases in the 1990s.

The next volume of Black Lagoon includes "The Wired Red Wild Card" arc. "Greenback" Janet Bhai returns, and People's Liberation Army hacker Li Xinlin is introduced. Viz Media licenses the English-language release of the manga, which is usually released in English long after the Japanese release.

Black Lagoon has an anime adaptation of two 12-episode seasons, as well as five OVA episodes. Geneon Entertainment originally licensed and dubbed the anime into English, and Funimation Entertainment now holds the license.