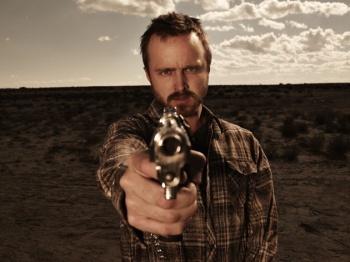 Ron Howard's The Dark Tower adaptation is apparently still underway, with hopes that Aaron Paul might star as a modern-day gunslinger.

The last time we heard about Ron Howard's The Dark Tower adaptation, the project seemed to have stalled in pre-production. That's unfortunate, but perhaps understandable. The original Stephen King novels blended Western, Fantasy, and Sci-Fi tropes into a massive tale of cowboys and parallel dimensions that would cost a small fortune to produce faithfully. While there's no official word that The Dark Tower is back on, those pre-production wheels are apparently still turning. During an interview at the Sundance Film Festival, Breaking Bad's Aaron Paul let slip that he'd met with Ron Howard about Eddie Dean, a central figure and fan-favorite character from The Dark Tower novels.

"I've had a ton of meetings on that," Paul said. "I just had a general sit down with Ron Howard, who is a huge fan of the show (Breaking Bad, naturally), which is such a crazy thing to even think that Ron Howard even knows who I am. They're definitely planning on making it."

Paul admitted to never having read the books before, but after Breaking Bad, it's hard to deny that he's a natural fit. In The Dark Tower, Dean is a heroin addict with a heart of gold who becomes entangled in Roland Deschain's journey to the mysterious Dark Tower. Following Roland on his quest, Eddie struggles with his addiction while training to become a formidable gunslinger in his own right, facing personal and literal demons along the way. In those terms, Eddie actually bears strong similarities to Breaking Bad's Jesse Pinkman, making Paul an excellent choice for the role.

If Paul's comments from the interview hold true, Howard is sticking with his plan of telling The Dark Tower's story across film and television adaptations. "Their goal is to do three films, but also have a television element to it," Paul explained, "which will be very interesting." That being said, we still can't confirm Dark Tower will be greenlit at all, let alone fit Howard's format, regardless of how well these meetings have gone. Then again, we live in a world where Marvel Studios can wildly succeed with similar large-scale projects, so perhaps putting Paul's name in the credits can get the ball rolling once again.