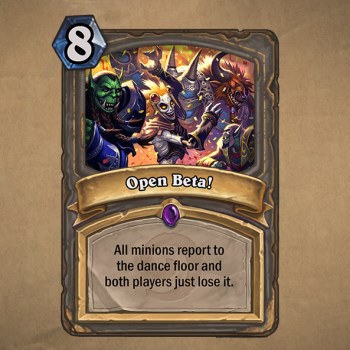 It's time to go play some Hearthstone!

Blizzard Entertainment has just announced that Hearthstone, the collectible card game it announced last year, is now in open beta. The beta test is currently limited to North America but will be rolled out to other regions in the next few days.

"It's been a crazy past few months for all of us on the Hearthstone team," Blizzard wrote on Battle.net. "We announced Hearthstone at PAX East back in March, began the Closed Beta Test in August, had a great Hearthstone event at BlizzCon with the Innkeeper's Invitational along with our announcements for Android and iPhone support, and now we're ready to unleash the awesomeness of Hearthstone to you with Open Beta!"

No more wipes are planned, meaning that players can now jump into the action with both feet, but Blizzard warned that there may still be bumps in the road.

"As open beta is still a beta phase, we will be closely monitoring many aspects of the game to ensure a positive play experience for everyone," it wrote. "Please be aware that if smoke starts curling out of our servers due to unexpectedly high demand to play Hearthstone, we may have to temporarily disable open beta account activations for a time until we're ready to take on more players."

The free-to-play Hearthstone client is available now at Battle.net.