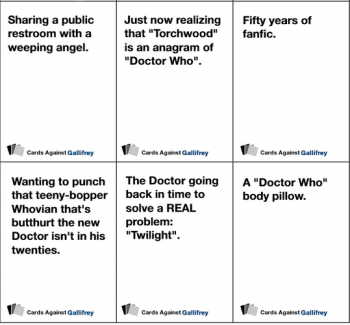 The Doctor going back in time to stop Twilight? Yes, I can see where that has potential.

If you've ever played Cards Against Humanity then you know how messy things can get, but one of the chief joys is that it's under Creative Commons. Anyone can make their own cards, so long as they don't sell them. Step forward Conventional Improv, who some of you may have seen at a convention or two. This comedy troupe put together a Doctor Who theme set for the 50th anniversary, and now that set has escaped into the wild. If Tom Baker in nothing but a scarf intrigues you, then you're in luck!

The full set can be seen over here, but fair warning: you might not want to explore this at work. It can also be downloaded over here, via Dropcanvas. Again, there's no fee for any of this; just sit back, relax, and let the sonic screwdriver do its thing. Well, one of its things. It has several different settings, you know ...