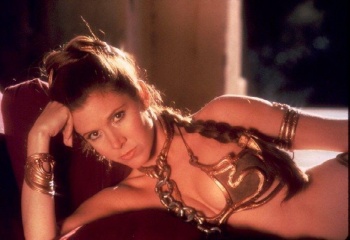 Luke Skywalker, Han Solo and Princess Leia will all turn up in Star Wars: Episode VII, according to actress Carrie Fisher, who recently told TV Guide that she's looking forward to beginning work on the film in March or April along with Ford and Hamill. She said she'd like to wear her famous Leia hairdo again, but with white hair, adding, "I think that would be funny."

The roles that Luke, Leia and Han will play in the new film have been a matter of much conjecture. It was reported earlier this month that departed screenwriter Michael Arndt originally had them on the sidelines in favor of a focus on a new cast, while director Abrams wanted to keep the trio front and center in order to give them a proper send-off. With Arndt out and "heavy revisions" to the script made by Abrams and his screenwriting partner Lawrence Kasdan, it would appear that the original Star Wars heroes will be the stars of the new show too.

Abrams confirmed earlier this week that the script for Star Wars: Episode VII is now complete. The film is currently slated to hit the big screen on December 18, 2015.